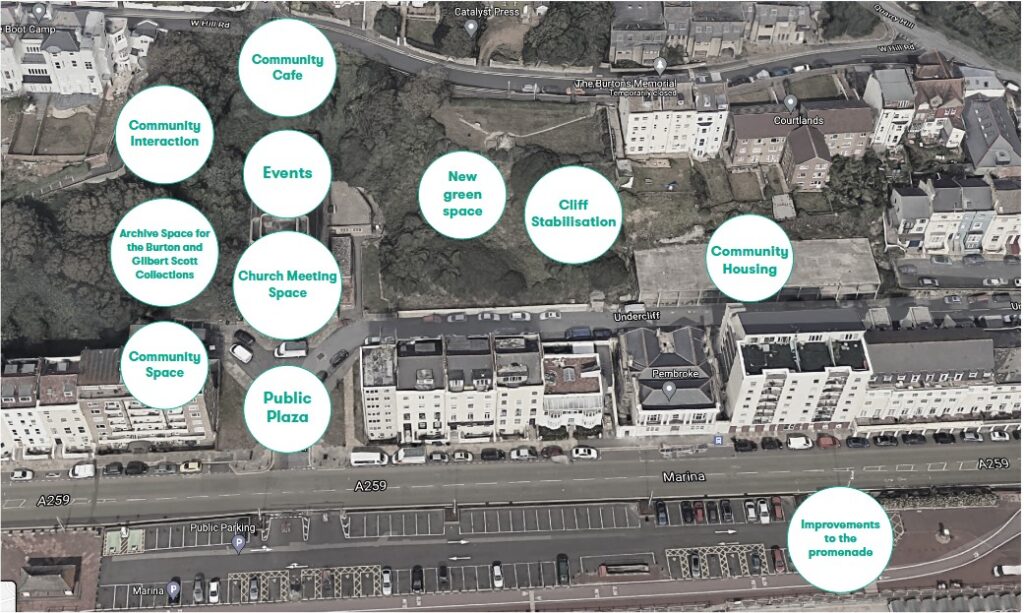 HUDG members are currently involved in two exciting ideas for the St Leonard’s church site both of which were presented at a meeting on 21st October in St Leonards Masonic Hall. The first being the ‘Science-on-Sea’ museum concept and the second being a community focused initiative. The latter proposes community housing on the long abandoned adjacent ‘concrete frame’ site, and community group usage of the church, including the possibility of using the space as a centre for rock climbing and concerts. The proposals will require a Community Land Trust model in order to develop the ideas and to help access the necessary funds. An alternative to these two suggestions is private ownership which, although it might secure the future of the building, would mean the loss of a valuable potential community asset.

The process of forming a ‘steering’ committee, to deal with the future of the church, is underway and is being organised by the West St Leonards Forum. Viable options will be presented to the committee, once formed, and then to the diocese of Chichester who will ultimately decide the fate of the church. The first major issue to confront, is stabilisation of the cliff behind the church (one of the hot topics of the meeting) which HUDG is progressing, with the help of the West St Leonard’s and Burton’s St Leonards Societies.

There was a lot of optimism at the meeting and it was exciting to see so many people who care greatly about the future of the church – watch this space!

You may remember the publication by HBC of the White Arkitekter Master Plan for White Rock  (see https://hastingsonlinetimes.co.uk/hot-topics/home-ground/white-rock-masterplan). That proposal, if carried out, would destroy much of the green space at White Rock and Summerfields in order to build an urban development more suited to a major city than a small seaside town. More than 700 comments were submitted to the Council by the public but none have been published. The obvious conclusion is that there was no community support for destroying yet another of our green spaces.

It is interesting to note that White Rock Gardens and Summerfields were bought from the Brisco estate in 1902 by the then Council to preserve the open space between Hastings and St Leonards and to create a public pleasure garden overlooking the sea. It is a great pity that our current Council does not share that vision.

Recently a suggestion has emerged for a development in the Gardens which is much more sympathetic, one which respects, enhances, and adds to the value of the green space and it’s origins as a public pleasure garden – a new Winter Garden (see https://hastingsonlinetimes.co.uk/hastings-life/green-times/a-covered-botanic-garden-for-hastings)

HUDG fully support commissioning a feasibility study to examine the viability of this initiative, and would like to see it as the start of a wider re-imagining of the future of White Rock Gardens by the community with a view to keeping this valuable open space as a pleasure garden.

Unlike the somewhat belated community involvement in the White Arkitekter report, there have been a number of previous studies about the Gardens which sought to fully engage the public from the very start to try to identify what they thought the future of the Gardens should be, two of which can be viewed here:

There are some common themes running through those two reports, the major ones being that the Gardens should be kept as a green space for public enjoyment, the other that some investment was needed to improve, and to add to the attractions. A brief summary of the suggestions ranged across:

The Hastings Greenway Trust, working with the community, is well placed to propose a series of better routes to and through the Gardens and to develop proposals for structure planting, but a wider holistic approach to reinvigorating the Gardens as public open space needs a wider community base. Over the next few weeks HUDG will be developing this theme on the Urban Room pages of their website to encourage debate.

HBC has been awarded £24.3m from their Town Fund bid – a little short of the £27m they applied for, but a major success.

Which projects didn’t make the final cut is not known, nor is there much information about the ones that did make it through. You can check out HBC’s Town Fund webpage here, but it has scant details to offer.

One thing that is clear from HBC’s web page and from the Government announcement, HBC intend to focus on developing Hastings Castle as a major visitor attraction, though no details are currently available.

Meanwhile in the absence of any such detail HUDG offer a few thoughts on their Urban Room page about the issues that might be considered in developing the detail of the proposals.

The Local Plan by its very nature is a somewhat fragmented and complex document. Policies and site allocations tend to be dealt with as separate issues, but of course they are not. It is time for some joined up thinking.

Obviously the Council has some difficult issues to resolve in looking forward to 2039, but it is disconcerting to find that at times, in the past, they have chosen to ignore their own policies. Will the current crop of policies and objectives enshrined in the Draft Local Plan suffer the same fate? Policies need to be clear, decision making consistent, and outcomes measurable, but above all the Council need to be seen to respect those policies, both in their own proposals and in dealing with planning applications by others.

Examples of the Council’s past selective approach and lack of consistency are many but a couple will suffice to make the point:

A policy to protect and enhance existing green space is apparently to be flouted by their proposal to build on a recreation ground at Bulverhythe, and potentially at White Rock. Yet “loss of green space” is quoted as one of the reasons for refusing permission for four houses on private land elsewhere. Surely it is time for some consistency?

A policy to adopt measures to ensure a carbon neutral future are apparently to be flouted, again at Bulverhythe, by a “maybe we will, maybe we won’t” approach to adopting renewable energy sources. What value is the intention to achieve a carbon neutral goal if the Council do not follow their own policies?

It remains to be seen what notice, if any, HBC take of these comments. If the still unpublished 700+ comments on their White Rock Master Plan are anything to go by, then one might conclude that little or no notice will be taken. 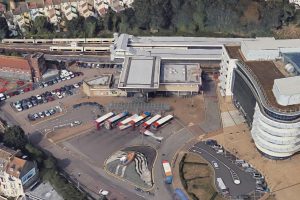 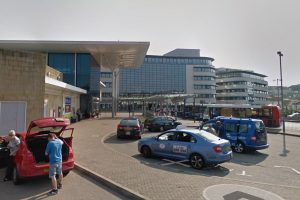 The Site Allocation Schedule section of the draft Local Plan (Site reference TC2) refers specifically to “the town square which is in front of the station”.

In reality, as can be seen in the photos above, what we have is a few bus stops, a traffic island and a parking lot. Hardly a civic space.

Past proposals from MBM, BDP and Rummey Associates, amongst others, offered the prospect of a civic space as a fitting gateway to Hastings. All apparently shelved, without community consultation, in favour of a traffic engineers “vision” which does nothing to enhance the perception or enjoyment of the town.

As part of the Local Plan review, and in light of the less than detailed aspirations of the Town Fund Bid, is it not time for the Council to show some evidence of joined-up thinking?

The current fragmented proposals for the town centre, embodied in the Local Plan and the Town Fund Bid, need a comprehensive review, based on past studies, and current aspirations to develop an over-arching vision that in addition to other improvements, could deliver a welcoming civic space in front of the station, which at the moment is just a figment of the Council’s imagination. 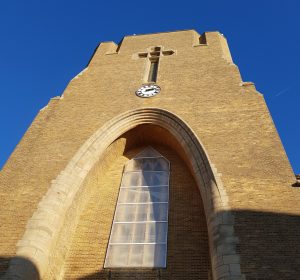 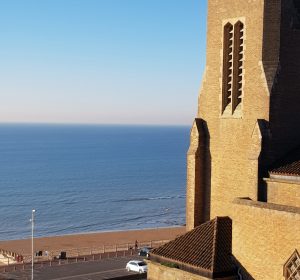 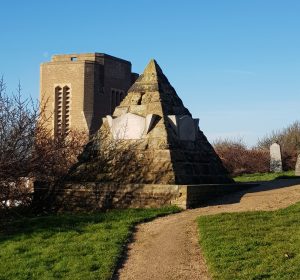 HUDG, led by Chris Lewcock (former Chair), have put in a £2.5m detailed proposal to the Town Board in an attempt to secure funding for a significant renewal project for St Leonards centred around the now disused St Leonards Parish Church.

Essentially the proposals include bringing the church back into use as a “Science on Sea” museum, stabilisation of the cliff behind the church, creation of a new public plaza, and completing the long abandoned site on Undercliff with a small housing development.

Further details can be found in the Hastings Online Times article which can be accessed via the following link:

Proposed Changes to the Planning System

Is the problem of too few houses being built really the fault of our, admittedly less than perfect, planning system?

According to recently published statistics it would appear not. On average across the UK the success rate for planning applications is 86%. Also across the UK over 400,000 houses with planning permission remain unbuilt, many of which have had permissions in place for over three years.

“The planning system is not a barrier to house building. The number of homes granted planning permission has far outpaced the number of homes being built. No-one can live in a planning permission, or a half-built house where work on a site has begun but not been completed. Councils need powers to tackle our housing backlog and step in where a site with planning permission lies dormant and house building has stalled. If we are to solve our housing shortage, councils need to be able to get building again and resume their role as major builders of affordable homes.”

Perhaps more and better resources should be allocated to speeding up the current system, with penalties in place for those developers who unjustifiably fail to deliver, and powers granted to local authorities to take over and complete stalled developments? Why go to the disruptive trouble and expense of building a new machine when the existing one can be modified?